The photographers’ art of capturing what they see

Murdo Macleod, an award-winning photographer, was on his way home to Edinburgh when he looked out of the window of his train and saw Eggborough power station, North Yorkshire, standing out of the landscape on a bright, still day.

Even through the window of the train he saw that the image of smoke and water vapour from the chimneys and towers of the power station would make some useful shots for stock. After he got home he chose what he thought were the best raw images from those he had taken – he regards the images before selection as being like a journalist’s notes – and filed them to the Guardian‘s Picdar database of pictures in London. In this case the picture was shot casually out of a train window while in transit as a stock image, and not as part of a conscious analysis of issues concerning coal-fired power station emissions or the critical study of their chemistry and appearances.

The Guardian has thousands of pictures on file to illustrate stories whenever necessary, including many of power stations in one mode or another. In this case they were taken by a photographer with a long and close relationship with the Guardian, but many are from agencies and freelance contributors.

The last time one of Macleod’s pictures of Eggborough was used was on 1 February 2011 to illustrate a story headlined UK greenhouse gas emissions fall. After it appeared above this story it became one of several images that some readers questioned. Had the image been digitally enhanced through the picture-editing program Photoshop to make smoke or water vapour look blacker and thus more environmentally unfriendly?

Another of the images in question was an agency picture of the same power station used with a story published on 24 November 2011 about the corporate social responsibility reports of companies, which include environmental statements. According to the story, one such company’s report “entirely legally, managed to excise a huge coal plant from their pollution record”. Cue a picture – online only – of an anonymous power station pouring forth smoke. Once again it was Eggborough. One problem with the use of the Macleod picture is that the picture was cropped so that only the cooling towers could be seen – and they only emit water vapour. The water vapour was unusually black. However, Macleod’s full shot shows why. A much taller chimney emitting a large cloud of smoke is to the left of the cooling towers. The sunlight comes from the left of that, so the blackness of the water vapour derives from the shadow of the real smoke – there is no digital enhancement whatsoever.

But there is another issue around the way the photographer works. Macleod says: “The camera doesn’t capture an objective reality; we are trying to capture something more dramatic and more interesting, trying to heighten the experience. It is about expression, as photographers aren’t there to blindly record the literal experience. But there is a line that has to be walked. You must be aware of the issues and exercise extreme caution.

“On your television you have the opportunity to vary the picture using the brightness and contrast, but when you do that you change the whole picture. When you take a picture you are able to change parts of the photograph, darken the skies and pull up the shadows to see the detail. As a photographer you naturally lighten and darken things selectively so you can see the detail. This is called burning (darker) and dodging (lightening).

“It’s an integral part of a photographer’s work, but you have to exercise a degree of responsibility about what is aesthetically suitable and technically necessary. If you go too far you can over-egg the pudding. Some people come from a school of puritanical literalism which is subjective. They see the sunset as having a particular colour and ask why doesn’t the photographer reproduce it?”

The agency picture used on 24 November wasn’t enhanced by the Guardian and nor was it used to emphasise a point – the Guardian has basic rules that we don’t use Photoshop techniques to distort an image. But to show the reader what’s there – yes, that is done.

David Sillitoe, the Guardian’s photographer in the Midlands, gives another perspective of photographing power stations: “There’s a place on the fringes of East Midlands airport that gives an unobstructed view north-east, across the M1, to Ratcliffe-on-Soar power station. I was there one day, and wind and rain swept across the landscape. The light was changing fast. The leaden rain clouds made the sky a dark steel grey; in contrast the low sun was warm and strong. This combination made for a dramatic image, the clouds of water vapour escaping the eight cooling towers pale against the heavy sky. 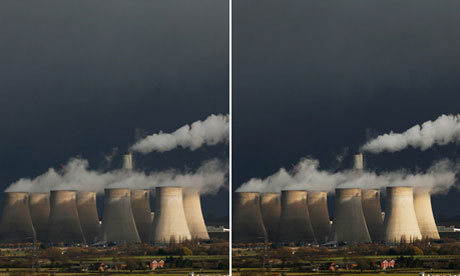 E.ON power station at Ratcliffe-on-Soar. The edited version of the image is on the right.
Photograph: David Sillitoe for the Guardian

“Dramatic light can’t (or certainly shouldn’t) be created in Photoshop, and what you see in these images is the raw file, straight from the camera. In the edited version (on the right, above) I merely did what I’d do with any photo that I’d send in to the picture desk, ie an adjustment of the levels, general colour balance and ‘unsharp mask’. In the pictures I made, I exposed for the highlights (in this case the light on the right-hand side of the cooling towers). This would have the effect of underexposing the general scene, giving a darker and more saturated image. The photos were made on a 200mm lens, which compresses the perspective, but still includes some context. What makes these photos work on a pictorial level is simply that the water vapour is lighter than the sky.”

This column was originally published in The Guardian on Dec. 11, 2011.